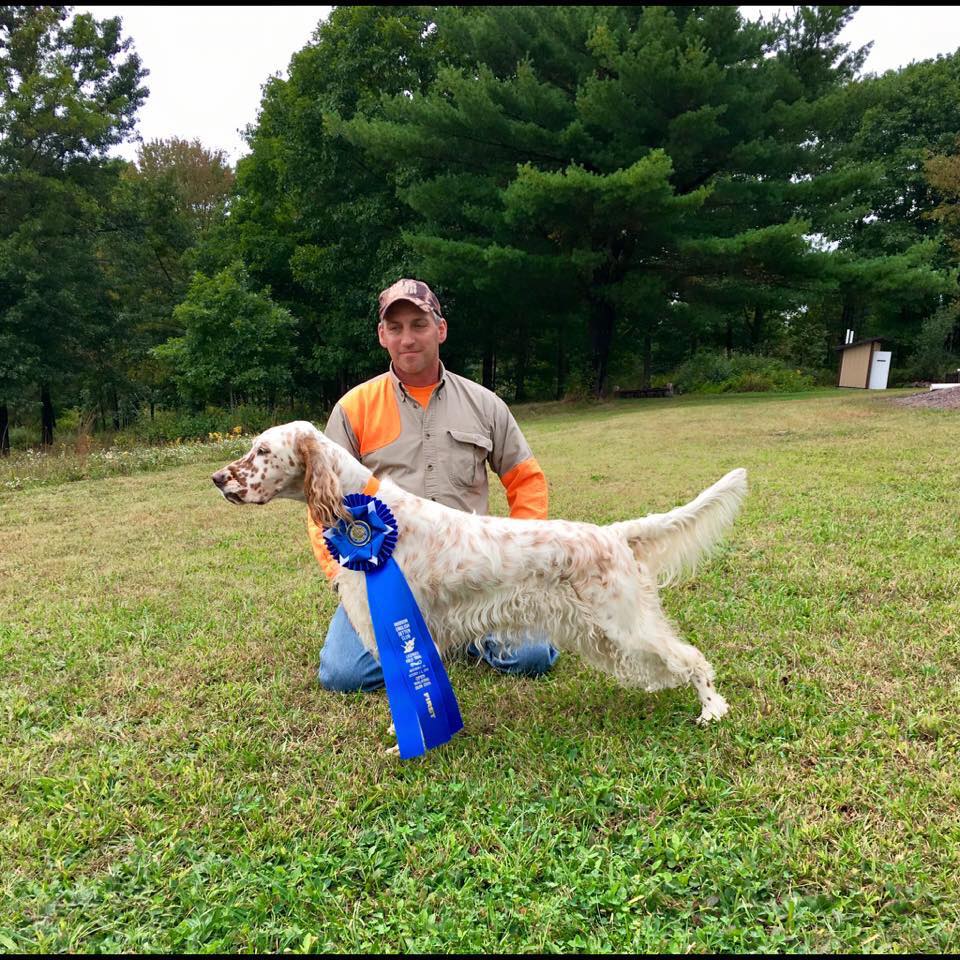 The Making of a Dual Champion

The AKC regiments for a dog to be recorded as a dual champion are as follows...the said dog must have earned a show championship as well as a field championship. The two can be done in either order .

Beginning of a Dream

It has always been a dream of ours to own a dog with those two titles, so in 2013 when we co bred & whelped a litter , I decided to carefully monitor the pups as they developed. At about the 6 week mark we began taking them out for short play sessions and that's when I tried them all on the wing on the string just to see if any would give a puppy point.  Now I know not all pups hunting instincts develop at the same time, so all this tells me is if any pups have a strong desire to point on sight. But more importantly it can show their future style on point.

Well to my pleasure almost all the pups did indeed point, but the orange bitch almost immediately locked up on a very stylish point! Now I had already began to like this pups confirmation and her boldness. So from that point on she became my pick of the litter and we named her Tessa ( which means HARVESTER ).

I felt that at the least she had the potential to become a show champion like her sire & master hunter like her dam, but I hoped that maybe with the right exposure she could go father.

I felt it would be better to go for the field titles first and do the showing later.  So the early training began her first spring /summer .  At first just taking her for walks in the cool mornings and afternoons and just letting her explore & gain confidence in the uplands.  It wasn't long before she began running edges, so instead of pulling her in I hopped on my 4 wheeler to keep up and let her develop the run a dog needs to compete in all breed field trials .

Her first fall I felt she was ready to run in puppy stakes so I began entering her in all breed field trials.  She ran well and earned placements in all most every trial we entered, but we soon learned that the competition was tough.  Most of the dogs competing in field trials are bred just strictly for that purpose . But we kept at it, and with more summer training Tessa began to put it all together and by her second fall she won her first derby stake .

Having earned all derby points needed ,it made no sense to run in derby even though she was still only 1 1/2 . So two months after the derby win she ran in her first Gundog stake ,and placed 2nd out of 9# adult dogs .

By the end of Tessa's second season I could see she truly loved the game, and in the spring of her third season she won her first horseback open Gundog major.

We had a very exciting fall in 2015 , first winning the ESAA 's amateur gundog stake in Ohio, and then just 4 days later she placed first again in a Amateur limited gundog stake.  Held on the historic English Setter Club of America's field trial grounds, that win finished her amateur field championship.

This was a real mile stone ,and it gave me the confidence to keep at it with this pretty bird dog. (yeah I got that a lot from judges and spectators alike).

One open gundog point sounds easy. Well not so much considering that at most trials there are pro handlers entering from 10 to 20 dogs each looking to earn those points also .   But Tessa deserved this title so we kept entering & competing and on a bright fall day in 2016 she won the open gun dog stake at the Hudson English setter clubs field trial ! It was a 2 point win.

At the ripe old age of 3 1/2 Tessa was a Field champion as well as a amateur field champion. I entered her in one more field trial in 2016 just for fun. It was in Michigan and I was beyond thrilled ,when she won the open gundog stake for another 3 point major .

At this point Tessa had earned 34 field trial placements in 8 different states, so we felt it was a good time to temporarily retire her from the field and begin concentrating on her show career.  Tessa was shown on a limited basis in between the field trailing and earned her first show major on May 6 2016 for 4 points under a breeder judge at the Hudson English Setter Clubs spring specialty.  We were beyond thrilled!

This is when we started to get excited about the real possibility of this setter becoming the next dual champion! So as hard as it was for me to do, I kept her out of the field to avoid any injuries and grow a little more coat. We did a few more local shows during the summer and picked up more points. This brought her up to 8 show points at the end of 2016 .

In February of 2017 Tessa was eligible to enter the prestigious Westminster Kennel Club dog show and already being a field champion, we felt she would represent the breeds dual qualities. It was experience not to be soon forgotten.

Following Westminster we entered her in the big apple sporting society specialty show . In the ring amongst top specials , Tessa was awarded the Best of Breed from the bred by class, giving her another 3 point major .

On May 7 of 2017, needing just 3 points to finish her show championship, we entered the Bucks County Kennel Club show in PA. The show had a large supported entry with majors in both dogs and bitches. The weather that day wasn't what most hope for at a outdoor show, but it didn't stop Tessa from giving her best showing to date. So I loosened the lead and gave her the ring.  When the judge gave her winners bitch, I was overcome with a feeling of pride, and all I could do to contain myself was to carry her out of the ring.  The support we received ring side was overwhelming.

It seemed surreal to me at the time, but our goal had been reached . Tessa is now and forever will be DC. AFC. WINDSOR'S FIELD HARVESTER JH.  The 13th Dual champion in the English Setter breed, and the first DC. AFC  since 1997.