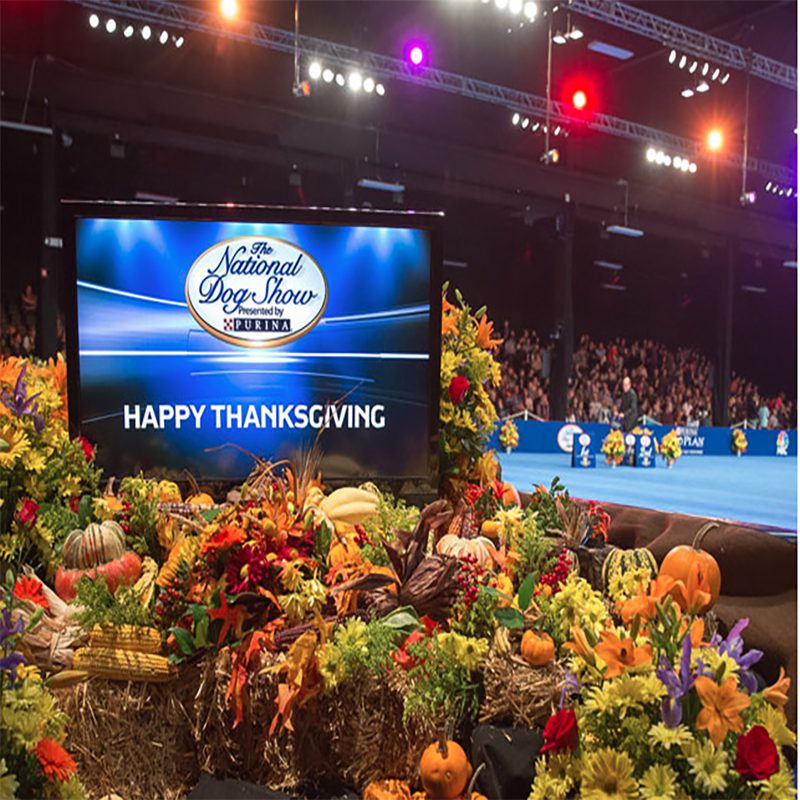 How the Kennel Club of Philadelphia “Made It” in Hollywood

The National Dog Show, broadcast on Thanksgiving Day, is brought to you by NBC Sports and Purina… and a whole lot of work and organization by Wayne Ferguson, president of the Kennel Club of Philadelphia, and his show committee.

Ferguson shares his tips to help local kennel clubs acquire sponsors and how a Hollywood parody dramatically changed the trajectory of a historic all breed club.

Story of the Hollywood Call

The phone call from Jon Miller at NBC Sports to talk about televising the Kennel Club of Philadelphia show promised a welcome infusion of revenue, but Ferguson initially turned down the request.

They originally wanted to do it as a parody, just like the Best in Show movie,” Ferguson said. “I told them, we just can’t do that. We take our dog show very seriously.” Fortunately the NBC crew agreed to his terms and the rest, as they say, is history.

Wayne Ferguson, president and announcer for the Kennel Club of Philadelphia, began his journey is purebred dogs in childhood. His father founded the Middlesex, New Jersey SPCA and young Wayne helped his dad run the “one man show” that was the animal shelter of the era.

He acquired his first Saint Bernard as a rescue while investigating a complaint for the SPCA. In his early 20s, working at a bank, Ferguson found a young female Saint tied in the basement of an abandoned home, standing in half a foot of water.

She was wagging her tail at the sight of me,” he recalls. “Can you imagine the trust in humans after being treated like that.” He promptly loaded her into his car and took her home.

Thus began a lifetime love affair with Saint Bernards which he developed into a longtime and successful breeding program.

His involvement with the purebred dog fancy dating back to the 1940s and ‘50s, led him to observe, in 1969, that show dog handlers needed easy access to products and tools to help them do their jobs. Ferguson established Cherrybrook pet supplies, originally selling the products from the back of his station wagon. He eventually built the business into an international supplier of premium dog show products.

An initial invitation to an all-breed club meeting morphed over the years into his current position with Kennel Club of Philadelphia.  Twenty years ago, Ferguson confides, his club was facing all of the same sorts of struggles and constraints familiar to most all-breed clubs across the country. A weak treasury and an expensive venue were causing significant concern for one of the longest running dog shows in the country.

Ferguson notes it’s important for local clubs to not wait for gifts to fall from the sky. “You have to go out and beat the bushes,” he noted. “Dog food companies aren’t as free with their funding as they used to be.

Find local businesses and show them a way” they can fit into the show’s promotion. His observation that too many kennel club members don’t want to do any fundraising work is all too familiar.

They want to show their dogs. Or maybe make lunch for the judges. But club members need to understand the importance of stepping up to the task,” he says.

Hire the Best Judges and Plenty of Them

“Nothing beats good leadership who know how to save money and spend money wisely,” Ferguson counsels. He continues on the theme of “penny wise, pound foolish” to recommend hiring high quality judges, even if they cost more, because they will draw an entry. And to hire more judges than are absolutely necessary, because that is what enables judges the time and relaxed schedule to interact with the exhibitors.

It’s predicated on budget, of course,” Ferguson observes. “But if you can hire extra judges, do that. It makes a difference.”

The resurrection of the famed Morris and Essex dog show takes Ferguson’s feeling about hiring plenty of judges to the extreme. Ferguson, who is president and show chair for M&E, believes he is bringing history forward with this grand event held every five years on the historic grounds of the Rockefeller Dodge estate. They hire more than 80 judges for 27 rings.

In an interview on the Morris and Essex Kennel Club website, talking about the M&E experience, Ferguson says:

We stop the judging at twelve noon and everybody has lunch – judges, handlers, exhibitors, spectators – and it works. Superintendents run the shows but clubs need to run deeper into their judging panels. Clubs should have judges doing one, two or three breeds, not dozens, and then when the judges are finished they have done only a couple of hours of judging, can spend time talking with and educating exhibitors, and will have time for pleasantries during pictures.

Particularly if we want our sport to grow – it’s important for the judge to speak to the novice handler and share what was good or what could be improved in the dog they showed that day.

“Also, I believe that if a show chairman believes a judge might have a political reason for accepting an assignment, the show chairman shouldn’t ask him or her in the first place.”

In keeping with the historical and traditional, one of the most notable aspects of the actual Kennel Club of Philadelphia show is that it is benched. One of only three remaining benched shows in the U.S., Ferguson believes the format is critical for spectators and for exhibitors.

Benched shows are great because all of the dogs in a breed are together,” Ferguson shares. “It’s wonderful for the public because you can find all of the dogs of the breed you want to see. (With benched shows) we used to take the time to interact. We were forced to stay, forced to talk to people, forced to learn more about our breed or another breed. It doesn’t happen when you can escape and run away (as in an unbenched show). The con is if you don’t like to talk to people and you think you know it all about your breed, you’re stuck there staring at the floor. We’re proud of our heritage. Benched shows shaped the sport.”

Hear all of this fabulous conversation with Wayne Ferguson on today’s PureDogTalk.com episode.

The National Dog Show, hosted by David Frei and John O’Hurley, airs Thanksgiving Day from noon to 2 p.m. in all time zones.

For all of our listeners who are competing in Philadelphia this weekend, best of luck, and make sure you post *spoiler alert* before any social media shares!